Autism is marked by deficiencies in communication, social interaction, sensory perception, adherence to routine and perseveration. Clinically, it is a developmental disorder. With a change in diagnostic criteria during the 1990’s, there has been a vast increase in diagnosis of the disorder in the years since. Whether this increase in diagnosis is a direct result of the diagnostic change or some other unknown factors is exactly that, unknown. Autism is not an individual disorder, like most mental health considerations, it affects the life of the individual diagnosed as well as the lives of all family members and care providers involved.

Diagnoses fall on a spectrum, thereby making “Autism Spectrum Disorder” (ASD) a common term in the professional lingo. Because of the spectrum designation, no two autism diagnoses are the same. On one end you have the “classic” autism, or autistic disorder, which is categorized by little-to-no verbal communication and pronounced self-stimulating (stimming) behaviors, while on the other end you have an individual that some would classify as simply being “awkward” or “quirky.” Being called a spectrum disorder is a double-edge sword for autism research. With the spectrum, more children are being diagnosed with autism than otherwise would be, which brings more attention to the disorder, hopefully opening up new research endeavors and more effective therapies. This is good, but on the flip-side you have a more watered-down version of autism, effectually spreading attention out among the many children diagnosed, drawing attention away from the extreme cases. If what is now called “classic” autism has different causation than the higher functioning forms of the disorder, then the spectrum classification might prevent focused research on all aspects of the disorder. Diagnostics and theories of causation can be controversial topics of discussion in relation to autism.

Specifically, communication is deficient in verbal and written forms. Echolalia is a term used to describe a common practice of autistics. When asked a question, or greeted, the autistic individual will repeat what has been said, rather than formulate an appropriate response. Some autistics are able to maintain a working set of phrases and terms, but are not able to generate statements of intent or desire, or express feelings. Typically, phrases will lack appropriate propositions and conjunctions, among other literary and grammatical expectations. Literacy is not out of the question for autistics, though it is severely delayed and limited in most cases. For some, written communication is not as limited as verbal communication. Due to motor impairments some individuals are able to communicate through typing even better than handwriting. Facilitated Communication (FC) is a common practice with autistics, wherein a trained therapist aides an individual in controlling hand movement in typing, though the therapy is controversial in its own right.

Social skills are delayed, skewed or non-existent with autism. Cues such as head nodding or finger pointing are common supplements to verbal communication, but are likely to be completely missed by autistics. Social referencing, common among young children to know how to react in a given situation, is mostly absent with autism. Rather than make eye contact, autistics will typically watch the mouth of a person speaking to them. The body language that we use to help get our message across in a conversation is typically not perceptible by autistics. Because of sensory perception differences, hugging and hand shaking might be unwelcomed by the autistic person, let alone the fact that the interactive social significance of such behaviors might not be understood. 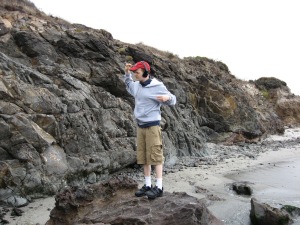 All people perceive their surroundings differently. Perception is based on biology as well as experience. Perception is the processing which occurs in the brain after stimulus is received by sensory organs. Damaged sense organs are not part of the autism diagnosis, though faulty perception is. This means that while the eyes, ears, nose, tongue and skin work in receiving signals, something in the brain differs from most people in regards to processing the information. For some autistics, a whisper sounds like a shout, a gentle hum of electricity in a light fixture might sound like a jet engine rumble, a dim light might seem like the brightness of the sun, a soft blanket might feel as coarse as sandpaper, and so on. This aspect of autism might be the most difficult to appreciate. It seems easier to understand how there can be communication deficiencies and under developed social cues than to understand sensory perceptive differences. These differences are why some autistics constantly wear headphones to block sound or only a certain type of clothing or fabric because of how it feels.

Perseveration is a process of repeating or focusing on one thought, phrase or behavior. Some autistic children perseverate on specific cartoons, others fixate on a toy or game. Adherence to routine is also prevalent with autism. An autistic child might stay with a very strict routine for long periods of time, wherein the same clothes are worn, the same food is eaten and the same activities carried out. Interruptions to the routine result in an obvious displeasure, possibly in the form of screaming, crying or physical tantrums.

While autism can be filtered down to a few key phrases, and is done so with the diagnostic criteria to a degree, it is a vast disorder. In the family of an autistic, no one is free from the disorder. Parents and siblings all live with autism. In this way, perhaps a new diagnosis of “secondhand autism” might be generated. Autism is a developmental disorder for the one diagnosed, but it is just as life-changing to all family members and care providers. Autism is frustrating, never-ending and invasive. It never sleeps (literally, with some individuals) and doesn’t go on vacation (nor does it let you go on one).  Its cause is unknown and it is incurable. In its most severe manifestations it can seem like a prison sentence. However, to the committed family member, though never easy, the process of caring for an autistic child or sibling can be rewarding in the way that it teaches compassion, charity and patience.

I wrote and originally published this article at Helium.com on October 7, 2010. Check out my book, Secondhand Autism, available in paperback or for the Amazon Kindle. The topic of this article is incorporated in one section of the book, but primarily the book is a personal account of the effect of autism in my family. My youngest brother, Scott, is diagnosed with autistic disorder.

I am a writer and a musician. My education is in psychology with emphasis in industrial/organizational psychology. My work experience has been primarily with electronic document management. Academically and intellectually I am interested in criminology and sociology. I am married to my favorite person in the world and we have one daughter.
View all posts by paulbrodie →
This entry was posted in Information and tagged autism, autism awareness, Paul Brodie, secondhand autism, what is autism. Bookmark the permalink.